Notes: These are not meant to be interpreted as measures of research output, but rather only as measures of the extent to which communities deposit their ouput at arXiv.org. The graphic illustrates its adoption by research communities that did not necessarily employ a formal prior paper preprint distribution system, as did HEP.

In calendar year 2005, the astro-ph and cond-mat submission rates each grew to exceed the hep rate (which appears to have flattened out in the late 1990s, suggesting 100% participation from that community, fluctuating about a mean of roughly 8800/year for 2000-2010, but then with a bit of a superluminal+higgs bump in 2011, and another higgs bump in 2012, to over 9600/year for each of those two years). A diminished cond-mat growth rate in 2004-2007 was due in part to the shift of biologically related submissions from cond-mat.soft to q-bio, and network/complex systems submissions from cond-mat.stat-mech to physics.soc-ph.

math(+math-ph) has been growing even faster since 2002 (suggesting a rapid adoption of this resource by an increasing percentage of the mathematics community). The cs rate started as well to ramp up in 2007 and grew to exceed the hep rate in calendar year 2012. It is misleading, of course, to compare subfields of physics to the entirety of mathematics or computer science, since the current total numbers of publications per year in the three overall domains are roughly comparable.

The current submission rates (i.e. averaged over calendar year 2012) as percentages of the average 2012 overall average rate of 7050/month (84603 total for 2012, corresponding to the vertical slices at 2012 in the above graphs) are roughly:

The graphs above show the cumulative data as a function of time, where the current total number of submissions to date as percentages of the total 810705 submissions (corresponding to the vertical slices at 2012 in the above, i.e. all of Aug 1991 through Dec 2012) are roughly: 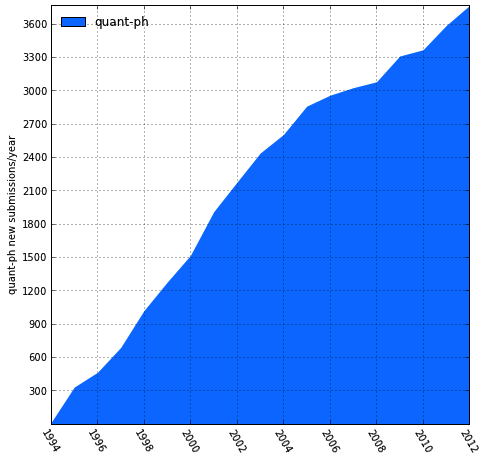 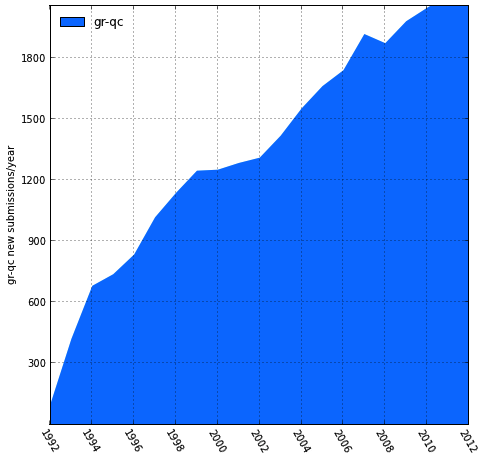 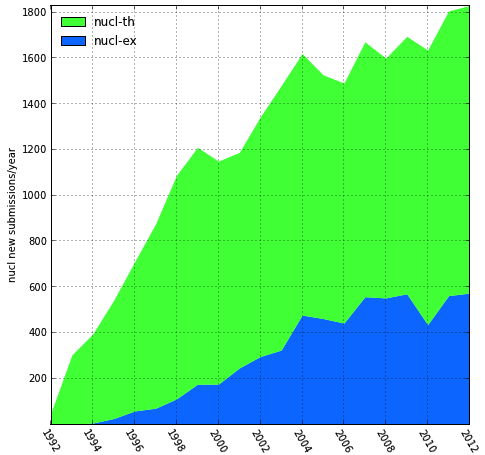